From Wikipedia:  A live action role-playing game (LARP) is a form of role-playing game where the participants physically portray their characters.  The players pursue goals within a fictional setting represented by the real world while interacting with each other in character. The outcome of player actions may be mediated by game rules or determined by consensus among players. Event arrangers called game masters decide the setting and rules to be used and facilitate play.

Educational live action role-playing (edu-larp) is the adoption of LARP to a classroom or other educational  setting. Edu-LARP is thus a “form of experiential learning that engages students on multiple levels, including cognitive, affective, and behavioral. Similar to drama pedagogy and simulation, edu-larp employs scenarios in the classroom in which students enact roles and engage with class content. Although edu-larp arises from the leisure activity of role-playing games, the practice affords similar benefits as other forms of experientiall learning.” 3

A significant form of Edu-LARP that is being currently applied in higher education is represented by the role-immersion games of Reacting to the Past as pioneered at Barnard College.  “Reacting to the Past (RTTP) consists of elaborate games, set in the past, in which students are assigned roles informed by classic texts in the history of ideas. Class sessions are run entirely by students; instructors advise and guide students and grade their oral and written work. It seeks to draw students into the past, promote engagement 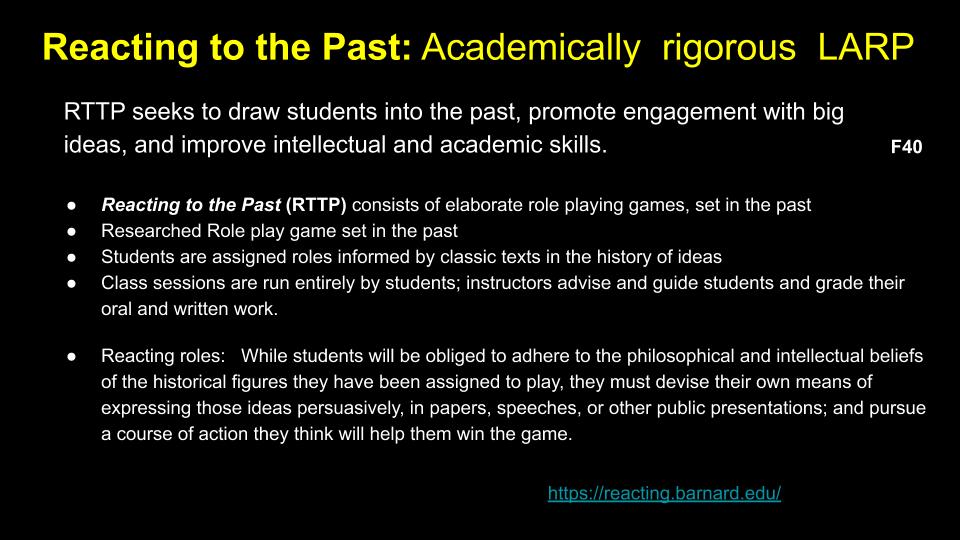 with big ideas, and improve intellectual and academic skills. Reacting roles, unlike those in a play, do not have a fixed script and outcome, so while students will be obliged to adhere to the philosophical and intellectual beliefs of the historical figures they have been assigned to play, they must devise their own means of expressing those ideas persuasively, in papers, speeches, or other public presentations; and students must also pursue a course of action they think will help them win the game.”4

Reacting to the Past

Reacting to the Past: Intro & Explanation of Game Play

Reacting to the Past: The Faculty Perspective

Reacting to the Past: The Student Perspective

Reacting to the Past: Documentary of a Game: Rousseau, Burke,and Revolution in France, 1791

How does Reacting to the Past help your students learn? (Rebecca Stanton)

How does Reacting to the Past help your students learn?  (Judith Shapiro)

The world according to EDU-LARP: the analog learning games