This research guide is intended to aid students in completion of the course assignments pertaining to the field of 20th century European history, through the lens of the Cold War.

Definitions of "The Cold War" from reference resources

The Cold War was born at the end of World War II in 1945 as wartime allies, the USSR and the United States, each sought to determine the future of Europe following the defeat of Nazi Germany. It later developed into a worldwide struggle for spheres of influence that lasted until 1991 but whose legacy will continue to be felt well into the twenty-first century. Citation: Ohan, Christopher, Adebayo Oyebade, and Gregg Andrew Brazinsky. "Cold War." In Oxford Encyclopedia of the Modern World. : Oxford University Press, 2008.

A term coined by Bernard Baruch in 1947 to describe the emerging tensions between the Soviet Union, and the Eastern European states under its influence on the one hand, and the USA and its Western European allies on the other. The tensions had been apparent ever since the division of occupied Germany into four zones and the beginning of Soviet administration in Eastern Europe, and was intensified by the Marshall Plan, which the Soviet Union forbade the countries under its control to accept. Citation: Palmowski, Jan. "Cold War." In A Dictionary of Contemporary World History. : Oxford University Press, 2008.

The Cold War was a political, idealogical, and economic struggle that was marked by an arms race, military alliances, and military conflict, in which the United States and the Soviet Union struggled to prevent each other from gaining world hegemony. The term "Cold War" was first used by the American columnist Walter Lippmann to describe the emerging conflict between the two powers at the end of World War II. When the term Cold War is used, it usually refers to the period following the end of World War II until the fall of the Berlin Wall in 1989. Allies during World War II in their struggles against Nazi Germany, Fascist Italy, and Imperial Japan, the two nations squared off against each other in the postwar period, seeking to enlarge their spheres of influence and to prevent the other from doing the same. Citation: Smith, E. Timothy, E. Timothy Smith, David Cortright, and Holger Nehring. "Cold War." In The Oxford International Encyclopedia of Peace. : Oxford University Press, 2010.

Spotlight: The Elements of Style 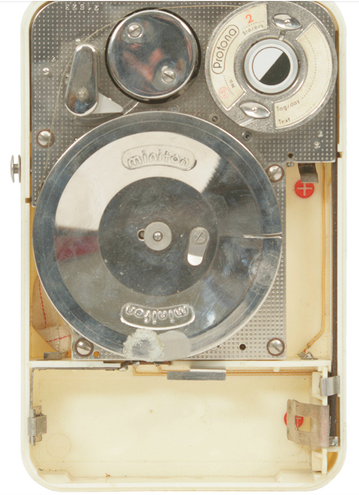 From the holdings of the British Library: Marketed during a period when Cold War espionage and suspicion was particularly acute, the Minifon had several accessories for covert recording, such as a small microphone that could fit onto a lapel. Although the recorder was advertised as a device that could fit into a pocket, it was, nevertheless, difficult to carry discretely; hence a specifically designed body harness was also sold that could carry the machine beneath the clothing.